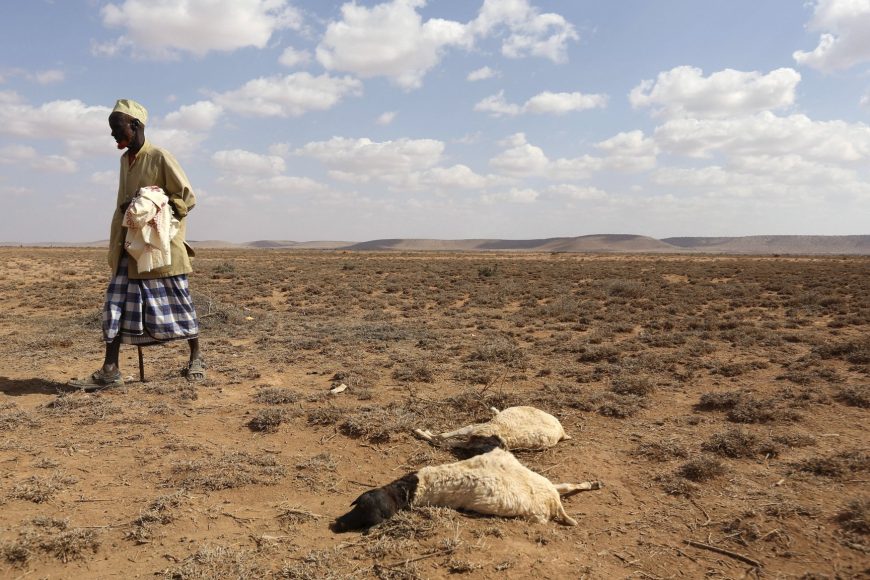 Famine in Somalia is due to the following three consecutive dry seasons, this was the driest period in decades. More than half of Somalia’s population faces severe hunger or starvation this year, primarily children. That is 2011/12, 2016/17, and the current one 2021/22.

According to the World Food Programme, 5.6 million people are food insecure, 2.7 million people cannot meet their daily food requirements. Somalia has a population of 12.3 million. By December 2021, approximately 840,000 children under the age of five are likely to be acutely malnourished in Somalia, including nearly 143,000 who are likely to be severely malnourished.

Famine in Somalia was last declared in Somalia six years ago, and more than 260,000 people died – more than half of them children. Nearly half of the deaths occurred before the famine was even declared.

Historically, Somalis have dealt with droughts well – they struggle, they lose livestock, they count their losses, and they bounce back. But now, the gaps between droughts are becoming smaller. The cycle is killing Somali children and robbing them of their futures.“

Located in the Horn of Africa, Somalia is surrounded by Djibouti in the northwest, Ethiopia in the west, and Kenya in the southwest. In the area, it is slightly smaller than Texas. Somalia is mostly arid and barren, with the Juba and Shebelle rivers as its major rivers. It is an Islam state and the races include 85% Somali, Bantu, and others covering 15% including Arabs 30,000.

Children affected by famine in Somalia.

Around 363,000 children under the age of 5 suffer acute malnutrition, including 71,000 who are severely malnourished and at high risk of disease and death. That is according to World Food Programme. A total of 330,000 of these children will require treatment for severe acute malnutrition, which can be fatal

70% of households do not have enough food to eat.

60% of households reported at least one person in their family had lost their source of income.

1/3 of households included at least one person going without food over 24 hours.

Food security in Somalia had already been compromised by previous droughts and famines. The current crisis is the result of rapid shifts from drought to flooding, as well as conflict and violence. Over the past several years, poor rains and harvests have decimated crops in Somalia, South Sudan, Ethiopia, and Kenya. Families are dying not only of starvation but also of diseases such as cholera plus measles due to a lack of clean water and sanitation.

In addition to living below the poverty line, more than half of the population is poor, making them especially vulnerable to climate change.

Since it’s an agricultural state, due to drought many farmers are losing their crops, and animals and water in the rivers are drying up. This is due to no rain received. Ethiopia, Kenya, and Somalia have decimated crops and caused abnormally high stock deaths due to the three consecutive failed rainy seasons. As a maShortageser and pasture are forcing families from their homes and triggering conflict between communities.

Furthermore, harvests are ruined, livestock is dying and hunger is going as recurrent droughts in the Horn of Africa. Including the increase in staple food prices and inflation as well as low demand for agricultural labour.

The Somali political crisis at the peak of famine in Somalia.

The drought comes at the time when the country (Somalia) has a political crisis ongoing. This come up at a time when the President’s term had ended and elections have always been delayed and this threatened the stability of the country. The government is more focused on the elections than what is affecting the country.  Due to the delayed elections, the IMF (International Monetary Fund) says Somalia funding is at risk reports Al Jazeera.

People are dying because of political unrest in the country. At least 13 were killed by a suicide bomber in central Somalia on the 19 of February 2022. Women and children suffer the effects more than men.

The effects of the drought are seen by any person that is to say:

First, to children, severe acute malnutrition can cause stunting and waste and leaves children so weak that they become far more vulnerable to diseases. The risk of dying from diseases such as measles or diarrhea is 11 times higher than for a well-nourished child. (UNICEF).

Secondly, drought also leads to migration. In Somalia, around 500,000 people left their homes in search of food, water, and pasture for their animals. This has been on since November adding on the 2.9 million who had already been displaced inside the country.

In addition to the above, children are at risk of joining armed groups. For instance, in 2021, 1,200 children including 45 girls, were recruited and used by armed groups. While another 1,000 children were abducted according to UNICEF. So children are victims of multiple violations in many instances.

A permanent solution has to be found soon to avoid the recurring outbreaks of famine in Somalia and the rest of the Horn of Africa.

The Somalia government has to prioritize response and ensure the current political crisis does not obstruct humanitarian aid delivery to affected children and families.

Secondly, local food banks should be created/ constructed to keep food so that when times like those come, there is food to supply to the people.

Harvesting rainwater. A simple fix for droughts can be done easily at home. When rainwater harvesting is used, homes can store rainwater and use it when it is needed during dry conditions. As an alternative to exhausting present water bodies.

Using this method can result in billions of trees being planted each day if it is practiced worldwide. This is a piece of old-fashioned advice that still holds today. The planting of more trees will improve the quality of the environment and increase precipitation.

Our energy has been derived from non-renewable sources, like petroleum, for a long time. By capturing and using these energies, more greenhouse gases are pumped into the atmosphere, resulting in global warming, and of course droughts. Renewable sources such as wind and solar would have little to no effect on the environment and would not cause droughts.

It is also imperative to educate the younger generation on the importance of protecting, preserving, and improving the environment as well as recycling, reusing, and planting trees. In addition to the education curriculum, the news media, and companies need to stress the importance of caring for the environment so that drought prevention becomes an individual responsibility.

They can be used locally, nationally, regionally, and internationally. Laws should be enforced against those who use practices that can result in droughts or damage the environment. In doing so, we can stop climate change and solve the drought problem. The measures include limiting greenhouse gas emissions and increasing taxes for non-compliance.